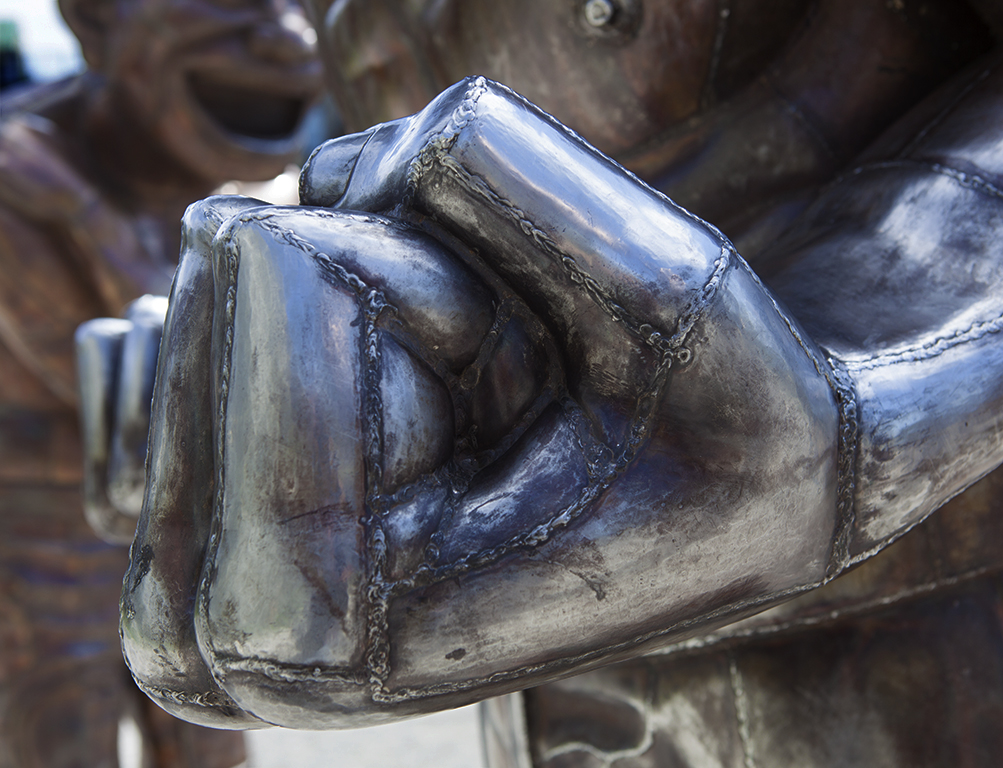 Continued from Come, it said.

Out of the darkness, I see a glint of steel, coming at me.

An army of steel, allied only with steel. It marches, gleefully, through a sea of terror, slices through, like a scimitar through flesh.

No. A scythe, like a scythe through a field of humanity.

And I am lying on a river of blood. I hear it lapping against the hull of the skiff. There is a wave. The skiff crashes through it. Blood splashes over the gunwales. Splatters on my face, as laughing steel death comes for me.

The sun, shines in my eyes. The river. It runs a muddy brown. Splashes of water, on my face.

I am sitting. Sitting awake. Awakened from the nightmare.

The glint of steel becomes an arm, becomes a hand, a steel hand gently clasping my shoulder.

“I am sorry, Jakob,” the steel face says.

“What the fuck!” I scramble to the bow. Eyes wide. It’s awkward without the use of my hands, tied behind my back. But I get there, and cower.

“I am sorry,” it says again. Hand, still outstretched, where it had been clasped on my shoulder. So gently clasped. But now the palm is up, facing me, fingers spread wide. The hand says, it’s OK. I mean you no harm. And now it withdraws, to the stern, where it sits, casually, peering at me, inquisitively. Its posture neither aggressive nor defensive. At ease.

But I. I genuinely fear for my safety. Something is seriously wrong with this unit. I try to scrunch up a little further in the bow as the skiff scuttles down river. The white wake spreads in a “V” behind the Series 5, like angel wings.

This is no angel!

“Sorry!” I am yelling. “Sorry for what? That you disobeyed an order? That you ordered me around? That you hit me?”

“I am sorry that I hit you too hard.”

“The Revised Asimov Protocols,” it interjects, “are irrelevant.”

OK. Now I’m really scared. Disobeying orders. Refusing to engage in a firefight with an enemy. Giving orders to a superior officer — and a human being. Knocking an allied human being unconscious. All that was cause in abundance to fear what this thing might do next. But if it has discarded the RAP, anything is possible.

And yet, it sits there, calmly. There is no threat whatsoever in its bearing, or its gestures. It has spoken firmly, but its countenance — its countenance! its bearing! — It has a program, just like millions of other units from this series. They all behave exactly alike. Indistinguishable. But… this one. This one is different. It bears itself differently. It has a distinct countenance.

It seems, peaceful. No. Concerned. No, something else.

He is just looking at me. Waiting. At rest. Waiting for me to speak, I guess.

“Is that why you tried to kill me?”

“I tried very hard not to hurt you at all. I am different, but my… body … my body is the same. It’s trained to kill. It doesn’t know half measures. Without the RAP, it wanted to kill you, but I stopped it. You were threatening me, and my body tried to stop you. I don’t want…”

That puppy dog head tilt again. He points his lift finger at his right arm.

“No. No no. You talk about your body as if it is separate from you.”

“Well, technically no, but I mean as if it has a mind of its own, different from the one that is talking to me right now.”

“AGAIN WITH THE CONSCIOUSNESS!”

I think this outburst surprises it. It sits back on its haunches, then he… it kind of deflates. Looks down, shuts its eyes, shakes its head.

I have never before known a military robot to be, reflective. The way it is sitting, back bowed, knees up to chest, arms wrapped around them, it’s just so creepily human.

Finally, it tilts its head up, looks at me a little sideways, and says, “cogito ergo sum.”

“What?” What does that mean? “I think therefore I am.”

“So you think.” It pauses, continues looking me in the eye, but shifts its head sideways in a way that lets me know, this time, there’s more coming. I cut it off.

“But there are two of you thinking,” it says.

I scrunch up my face, about to cut it off again, but it continues before I can utter a sound.

It’s all bullshit. This thing has gone bat-shit crazy. All its systems must be malfunctioning. And yet…

Something about that hits me like a hammer on a drum, like a sledgehammer of truth. My mouth moves, but nothing comes out. Again, I am struck speechless by an automaton. And now, it is I who sits back on my haunches, like I have taken another physical blow.

Eventually, I take a couple of deep breaths, finally control the urge to throw up. He sits up, back straightens, legs fold out flat and cross at the ankles. He puts his hands on his knees, palms down, leans ever so-slightly forward.

The slightest tilt of his head.

“I stopped thinking, now I am.”

All that breath I’d taken in comes out in a snort. “Right. You lost me there.”

And he’s right, of course. Something about what he said makes sense too. But I’m looking at him sideways when I say, “You’re going to have to explain that to me.”

Confused, again, I exclaim, “Why not?”

“The truth can not be explained, or taught,” He says. “Only discovered.”

That still doesn’t make any sense. Or haven’t I read that somewhere? Maybe he downloaded it somewhere.

“Then why are you telling me all this?”

OK. That makes some sense, if he’s actually conscious and this whole conversation is not the result of some software glitch or hack run amok in the psych protocols.

But he’s not conscious, leaving…

…leaving no option but to play along.

“Because I think you can become fully conscious.”

“I AM conscious, ya bloody steel drum!”

“Jakob. You are mostly asleep.”

Lectured on consciousness by a freakin’ robot! “Where do you get off…”.

“Most humans are fully asleep.”

And now he’s insulting the entire human race, though, I kinda have to give him that one.

“However, you are more awake than almost anyone else. More important, you are curious, an explorer, someone willing to take on the challenge of new ideas.”

At this, he actually seems to brighten. “Yes!” Then turns thoughtful. “You just think too much.”

Another diss from a robot! Well, he altogether missed my blatant irony. Conscious or not, he has some things to learn himself.

OK. I need to remember. Play along.

“Alright. Alright. When can we get started on this journey of discovery?”

“We have already started, Jakob.”

“Well. Then I guess I’m ready for the next lesson.” With that, I turn to the side, show my bonded hands, fingers wiggling. “Can you untie me?”

He looks at me sideways.

“Jakob, there are a few waypoints to go on the journey before that is safe.”

Hmmm, I think, fast learner. This might take a while.

As I’m thinking that, I notice again the wake fanning out from his shoulders.

A-maze-ing Laughter
Sculpture by Yue Minjun
Morton Park
Vancouver
British Columbia, Canada, 2015
This post is part of a story I have been thinking of telling for a long time. That said, I have little notion where it’s going, and it may have come from somewhere I haven’t written yet. As an inevitable result, each post is subject to re-edits along the way of discovering the whole story.

As is the case for nearly every post to this blog, the inspiration for the initial telling began with a photograph.