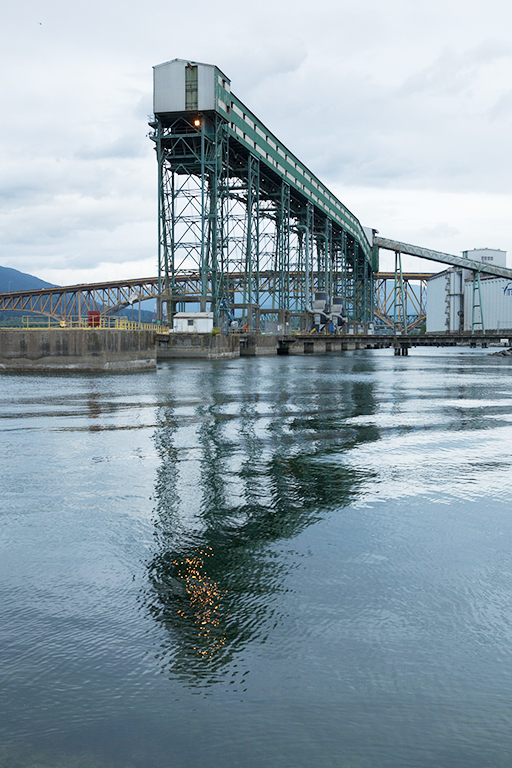 I went out on a photo safari with a buddy of mine, eventually landing at Vancouver’s New Brighton Park, an inner harbour green space surrounded by port facilities, including this sugar off-loading dock.

I was intrigued by the shapes, and the somber mood of the clouds, and by the reflection the unloading facilities cast on Burrard Inlet. I shot off a series of photos, hoping something would work.

These were some of the early photographs I’d taken with my new Canon EOS 5D Mark II, and it was that purchase and these early photographs which inspired me to start Pix to Words. So, as I looked through the series and found one worth editing, I was also looking for the words I would use to post it.

I didn’t find any.

And, well, the image is nice enough, but it wasn’t really singing to me either.

Hmmm, what about the reflection in water? The golden highlights cast off from the flood lamp in that field of green and black… that looks kind of interesting.

So I zoomed in. And it was kind of interesting. It was even more interesting when I started rotating the image around. Upside down was most interesting. I think because it really heightens the abstract feeling… the eye is just not sure what to do with it.

In the end, I framed up something like this…

Which is much better. But, pretty as that is, there still weren’t any words coming. “Hmmmm,” I thought, maybe one of the other images in the series has a better reflection?

And one did. In that image, the lights created a pattern I almost immediately saw as a dragon, with two malevolent eyes, and a spray of fiery breath. Now I’d found some beauty.

Words came rather quickly for that one, and it was posted as Breathing Fire.

From New Brighton Park
Vancouver
British Columbia, Canada, 2015
I started this entry a couple days ago, intending it for Nancy Merrill’s Photo a Week Challenge: One Photo, Two Treatments, but work got in the way and I couldn’t complete it in time to meet the deadline, unfortunately. : (