It was the last full day in India. The smoke had been chokingly thick for the entire month I’d spent in the north, and Delhi hadn’t even been the worst of it. Still, I’d found a decent rate at a decent hotel (some small comfort in exchange for the respiratory distress) on the edge of Old Delhi’s fantastical Chandni Chowk markets for the final days before my flight home.

Chandni Chowk is a huge maze of ridiculously narrow and crowded streets packed to the gills with commerce and humanity, a place without solitude or silence. Except, in the morning, on the rooftop of the Hotel Tara Palace, where a couple tables are setup and a guest can order breakfast in the wan sun, barely breaking through the dense atmosphere. Yes. It is really that colour, and that thick, illuminated by the early rays of an infant day.

It’s a spacious rooftop, much of it devoted to no discernable function, and some given over to hanging laundry or stashing unused or unusable flotsam from the hotel. I explore the old city from the rooftop a bit while waiting for breakfast, snap off frames of the cityscape dominated by Jama Masjid, the massive mosque in red and white stone rising well above the rabbit warren of Chandni Chowk. The red sandstone and white marble mosque is spectacular that morning, the facade illumined and shadowed in the atmospheric amber filter. Black Kites and Pigeons fill the air.

Breakfast arrives and I dare not leave it unattended. The monkeys are scampering about, and it would not be the first time one of the little bastards ran off with at least a portion of my meal. So, instead, I munch away and between bites run off some photographs of the monkeys, with mostly meh results until this little fellow eyes my yogurt and fruit from the nearest railing. Eventually, he must realize I’m not going to give him the opportunity to steal it, so he walks to the corner of the roof and preens himself a bit —  relaxed as can be on the edge of a ten story fall — before trundling off. Before that, I manage to get one idyllic shot of him lounging on that corner, atmosphere vibrantly illuminated, with the ancient Mughal architecture of the Red Fort in the background. A rare moment captured between sips of orange juice on my last full day in India.

This photograph was awarded 1st Honorable Mention in the Animal Photography category by the 2021 Power of Photography Contest, organized by the Wide Angle Photo Club in Pensacola, Florida.
A little while ago, I was messaging with Christy Draper, the club’s current Chairperson (and the photographer/poet behind the excellent Dancing Echoes) about the image and asked if she wanted to know the story behind it. This post (with some additional edits) is what I wrote her.
Prints of this photograph available through Fine Art America. 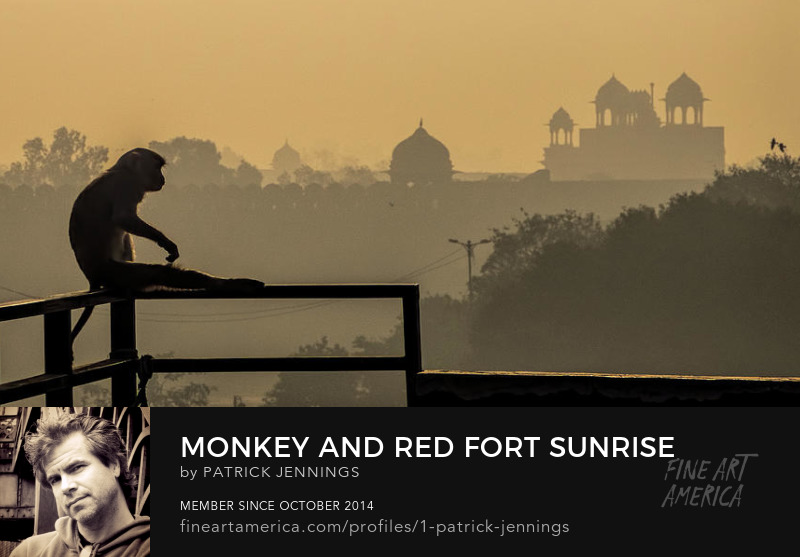