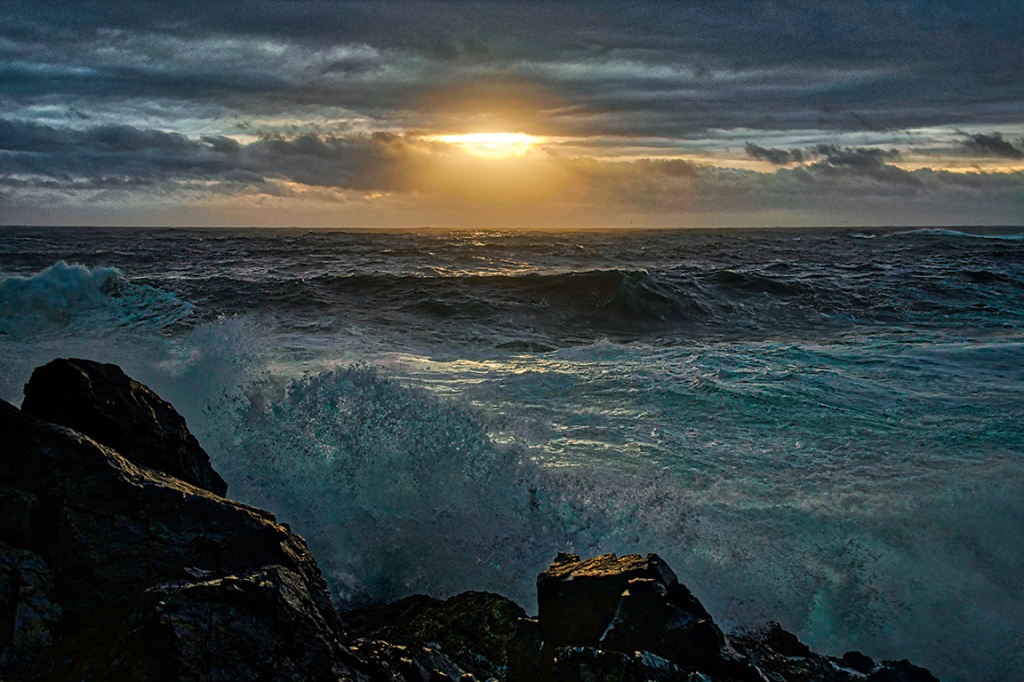 I’ve got some time off. A lot of time, actually. I’ll spend most of it working on some projects and skiing. But today I drove and ferried out to Vancouver Island’s west coast, where it’s storm season. Big weather and big waves crashing down on rocky shores and wide sandy beaches that go on as far as the eyes can see through all that sea mist. Been out this way a few times before, but never while the Pacific was particularly angry. So, knocking something off the bucket list.

It was dismal grey and a little rainy when I left home, bound for the ferry terminal. A promising start.

Crossing the Strait of Georgia, the ferry listed noticeably in the heavy wind, pitched and rolled in the burgeoning swells. I got one of my patented motion-sickness headaches when I went inside for a veggie burger. Just too hungry to wait. I ate it outside, buffeted by the chill wind.

Yep. This is going to be awesome.

By the time I got on the Island Highway, the rain was really coming down. Visibility kinda sucked. At several points, twisty/narrow Highway 4, which crosses the Island, was flooded. Once, up to the axles. In the mountains, the rain was mixed with snow.

Starting to get excited.

By the time I got to Cygnet Cove, the rain had abated. Can’t say I was disappointed. It was just after 3pm, and I had only a bit over an hour of daylight left. Just across the street from the guest house, the crashing waves leaped above jagged rock. White froth ran in rivulets down the rock, back into the ocean. Leaving everything in the car, I went to check in. After a quick tour of the suite, I grabbed the keys, grabbed my camera bag from the car and headed down to the shore.

Sounding like constant peals of thunder, the ocean recklessly and relentlessly threw itself against the Island, casting wind-borne spray up onto the trees above. The air was thick with it.

I shot just under 200 photographs today. A bunch on the ferry, but the majority in that one hour, scrambling over the rocks trying to get different looks. At one point, sunlight managed to claw a hole in the thick storm clouds. It peeked out onto the Pacific, before the ocean said, “That’s enough of that!” and closed up the hole.

But I did manage to get off several frames before that. This is one of them.

I pushed it pretty hard when editing it. Technically, it’s fairly weak. I’ll have to be much more subtle if I ever want to print it. But for the web… small enough to display on a screen is fairly forgiving of technical shortcomings.

Just to let my friends know exactly why it’s actually a good idea to spend a vacation heading into stormy weather, I posted it to facebook.

It didn’t take long to get likes, and loves and wows, but half an hour later the first comment came by way of my brother-in-law’s brother, all the way on the other side of the globe, in Queensland, Australia.

“Waiting for Charlton Heston to appear…”

Chuckling and typing at the same time, I posted a response seconds later.

“I don’t think even Charlton Heston could part this sea. ”